Whew, this past weekend was one for the books!  As I said in my Friday’s Favorite’s post, we spent the weekend at a friend’s cabin in Alexandria and had such a great time!  We ended up with some great weather and got to spend time on the water, at a winery and playing some Phase 10! #becausewerecoollikethat

And just FYI… I think the hubs and I truly need a lake home.. seriously.. life just seems better at the lake.  Who’s with me on this one??  I could totally see myself blogging from the lake on the daily 🙂 Well, until winter comes! I’d love to say the ocean instead but think that’d be a little out of reach. At least for now a days 🙂

Now onto the “good” stuff… recap time! Thursday, Jess and I went up early after work for the evening (the hubs met us a little later after class!).

We immediately grabbed a glass of wine and sat down on the dock!

Thursday night consisted of chatting, unpacking and some wine drinking!

Friday was a day full of water, flamingos, sun and more drinks!!

The hubs bringing down the Flamingos!

It was so relaxing to just hang out by the water after the Summer we have had!  The sun came out early and it was nice and hot all day! 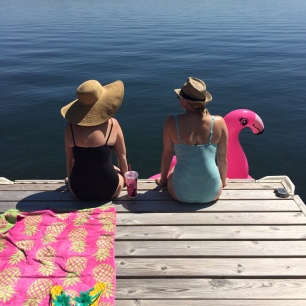 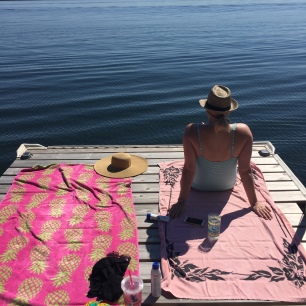 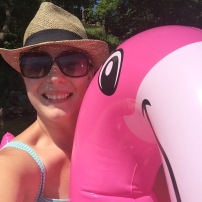 The hubs enjoyed some time on the jetski! 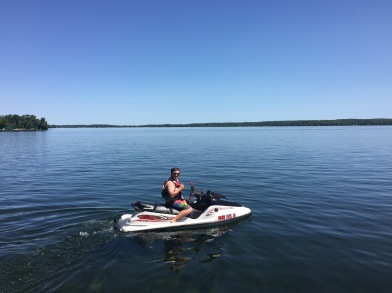 Jeff came after a meeting on Friday (Happy Birthday last Friday, Jeff!) and we all got to soak up some quality time together!

That is until the boys went golfing… 30 holes during Twilight time!  Can you say boring?? Oh yeah, and the hubs did 18 in the AM by himself.. Obsessed much?! 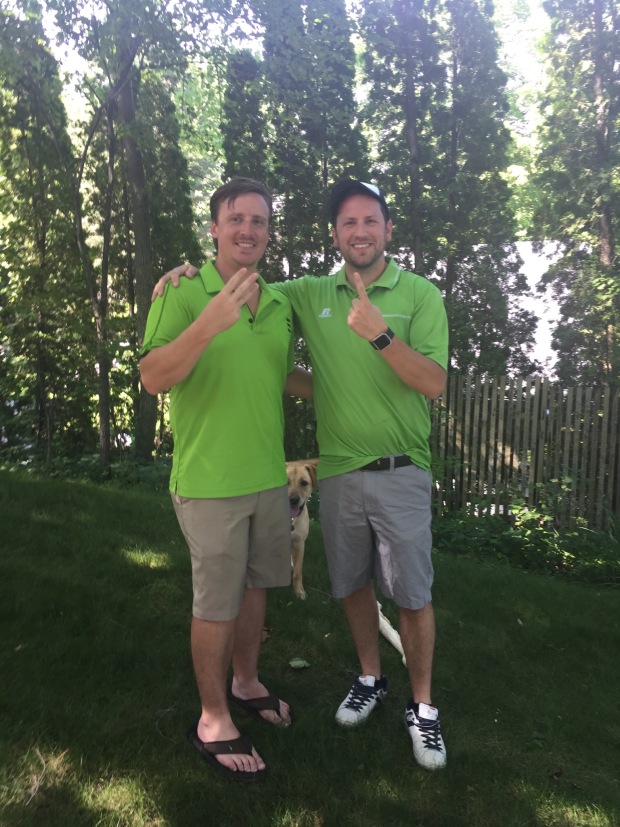 Somehow (without knowing) they matched!!

We ended the day with grilling out and lots of veggies!  #becausewewanttosaywerehealthy We also had some ice cream cake from DQ… Hollllllla!!! So incredibly good!  Give me some of that any day!

Saturday, the weather was a bit chilly and windy/rainy in the morning and we weren’t sure what we’d do all day… so we did what anyone in their right mind would do… visited a winery!! 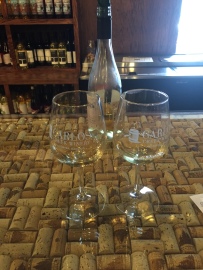 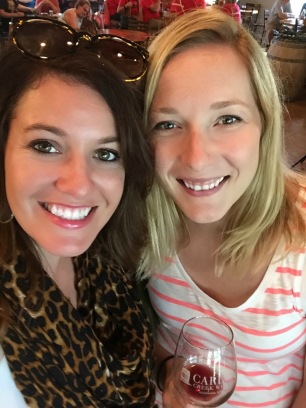 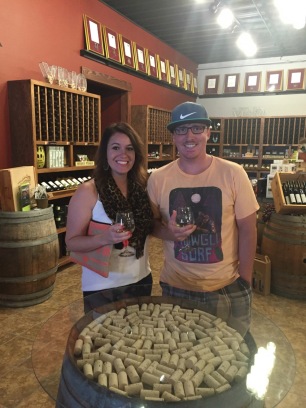 As I mentioned before, we always hit up Carlos Creek Winery for some good live music and great wine!  They did a complete renovation from the last time we were there (last year!) so it was fun to see all the updates!

They added a little cave area where they give a little bit of the history of wine and the winery!

And now for an array of winery photos because.. well duh, it’s a winery and it’s beautiful! 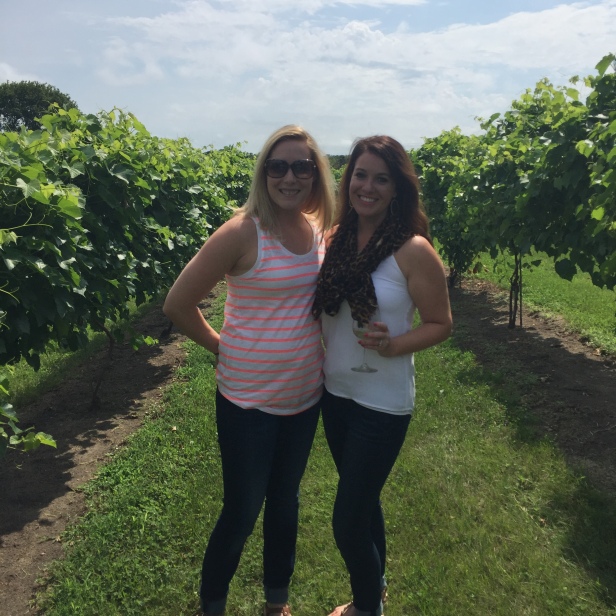 How funny are these signs that are in the hallway to the bathroom?? This is clearly how I feel about wine.. and Casual Friday at work 🙂 #iweartiarasathomeallthetime 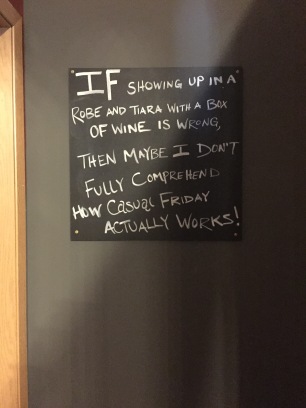 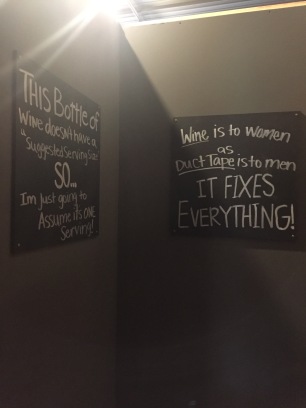 Give me a winery and warm weather any day!! 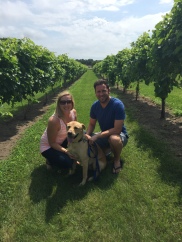 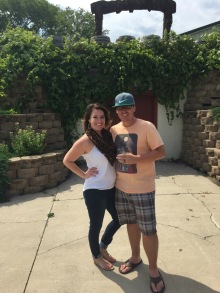 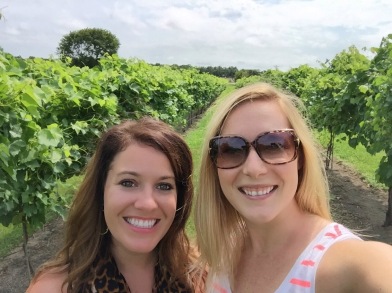 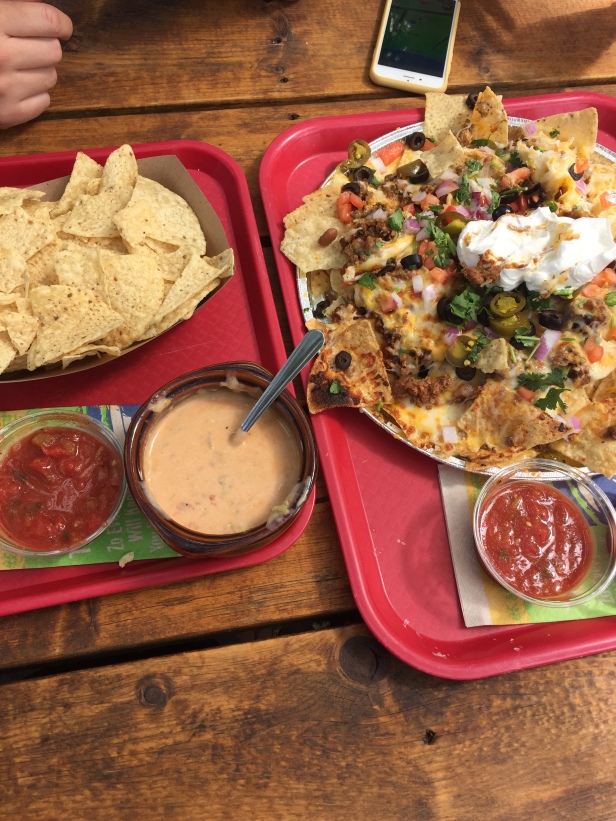 We really lucked out, after the storms in the morning, we had beautiful weather the rest of the day!  We stopped by Zorbas for a few cocktails and some nachos.. and of course queso! #becauseitsyummy #duh

We headed back to the cabin after and watched an episode of Law & Order: SVU.. think I got Jess and Jeff hooked a little bit 🙂

After that, we went in the hot tub on the deck! I should have taken a picture of the view because it’s amazing!

We had a fun little bonfire… I say little because it lasted 15 minute and my husband asked a million questions during it… “If you were on a stranded island for the rest of your life and could bring 1 book, 1 type of food and listen to 1 song forever, what would they be?” “If you could go anywhere in the whole world, where would it be..?” etc!  After having 3 s’mores (I normally eat approximately 24 but decided I should cut back this year!) we decided it was time for a Phase 10 rematch (hubs won the previous night) because we’re serious gamers! #notevenclose

We had a cheese platter, a million veggies, strawberries and Chex Mix.. and some drinks to end the night off 🙂

Every year after we leave, I literally look up a million “lake homes” and tell the hubs we MUST move ASAP!  He thinks i’m kidding but there’s no kidding here.. Lake home or bust!  I’ll even take a home on the ocean if he prefers that 😉

Hi! My name is Kristi and i'm a newly wife and puppy Mama! I love all things Lilly Pulitzer, Flamingos, Pineapples, Christmas and wine! I truly believe everyday is a gift and am truly thankful for each day I get to spend along side my hubby and loved ones! Follow along on our journey of married life!